The ultra-processed food diet resulted both in weight gain and 508 calories per day greater intake (mostly carbohydrate) than the real food diet, which resulted in weight loss. The only things that distinguished the ingestion patterns were higher carbohydrate and less fiber in the ultra-processed diet. Finally, body weight changes correlated with changes in energy intake.

Bottom line: like other studies which preceded it (eg, the DIETFITS study), this study shows that real food works, and processed food doesn’t — take it to the bank. Real food resulted in fewer calories consumed, but we can’t infer that the effect was due to increased fiber (fewer calories absorbed); decreased energy density; reductions in carbohydrate; reductions in insulin and changes in leptin signaling; feeding the microbiome; and/or increased satiety.

And what about the food industry’s real versus fake news? Can we discern if, and which, macronutrients are the bad guys? What really reduced caloric intake? Unfortunately, this study was not designed or powered to assess whether certain macronutrients (like starch, fat, fructose) altered food intake apart from its caloric equivalent. Hall is a thermodynamics guy—and a calorie is always a calorie. So, don’t expect any other seminal answers out of this one. 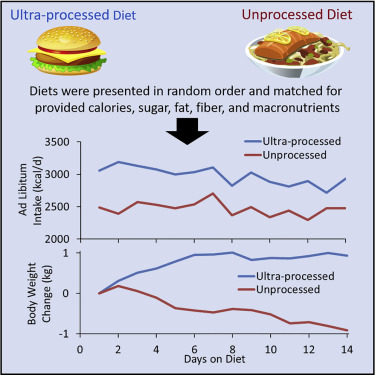 These links will give you direct access to the content, without having to register. In order to access other content on PracticeUpdate, you may need to register. It is a quick process and it’s free.